Today a visit to the hilltop suburb of Alto de Florida, an hour south of Bogota. The last mile in was on a steep, rutted dirt track. The community has electricity but no running water or sewage. Water is delivered in tank trucks. The school is a one hour walk for the children. The Church runs a communal soup kitchen. We climbed the last bit to reach the site of the Profamilia mobile health clinic, which did not operate out of a van, but instead, was set up inside two ramshackle huts on a precipitous ledge. The Profamilia team consisted of two doctors, two nurses, two social workers and a van to transport all the necessary equipment. The social workers had visited many times over the past weeks to educate the community on the upcoming visit. When we arrived at 9am, about ten women and children were already lined up and waiting. An hour later there were about 80 mothers and children, and a few men, waiting. The Profamilia staff quickly set up a consultation room and exam suit in one hut and another consultation area and dispensary in the other. The lead doctor took everyone’s name.

Most of the visits were pediatric, but the mothers also wanted family planning for themselves. The number of children ranged from one to eleven. The women worked as scavengers mostly. Their education level averaged sixth grade. Few of their husbands worked. About half were married. Almost all started as teen mothers. They all looked ten years older than their real age.Some opted for the IUD, some for implants and four opted for sterilization. They participated in an education class on tubal ligation, and were firm in their determination not to have any more children. These women had two or three already. Their major concern was whether the sterilization would affect their sex life. The logistics were also a concern, since they had to arrange child care and to be picked up after the operation. They figured out among themselves how to handle all this. It was carefully explained that the procedure was permanent and that there were other temporary methods available until they were sure. They were and all showed up for their appointments the next day. Profamilia is unique in that a woman can get a sterilization the next day, whereas in the health system it can take months and by that time the woman is often pregnant. The cost of the procedure is fifty cents. The rest
Is subsidized by a private foundation.

This Profamilia program is imperiled by funding cuts. It is the only health care these women and children get. It is almost entirely free but the patients are charged a nominal fee so that they will value the services. It costs $2200 per day to take these mobile health services to remote villages like Alto de Florida.

I quickly made friends with the six and seven year olds, my Spanish was about on their level. My camera became the big hit and soon I was showing them how to put the wrist strap on and how to take photos and show their finished work on the digital screen. They shared the camera quite fairly and were thrilled to take each others photos. Their work was in many cases stunning. Their Photos are attached. 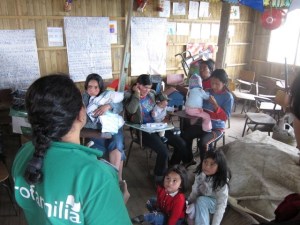 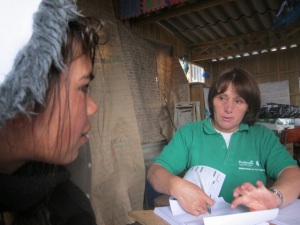 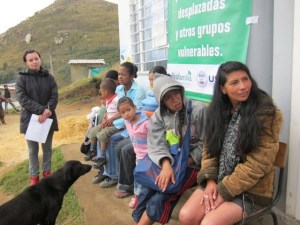 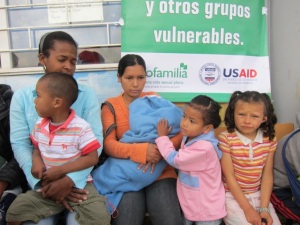