Today we visited Colombiaton, a new settlement on the outskirts of Cartagena, built to relieve the overcrowding of the refugee camps. The school we visited was new and spotless with a large playground. We attended a workshop on violence for Profamilia peer educators. The new wrinkle today was that Profamilia had asked 1200 students in Cartagena whom they wanted to hear from on this topic and other reproductive health issues. Out came a long list of movie and music stars. Profamilia contacted them, and many agreed to be spokespeople and to appear at events in schools. Today Tony Cruz and Johnny Legendario, rap stars, were scheduled to appear at the school.

After a few preliminaries, in came the rap stars to the screams of the girls and the blare of the “music” and within a few seconds I was hauled out onto the dance floor and put through my paces, making a total fool of myself, but for a good cause.

Fortunately it was soon time for the workshop, I got to sit and my heart rate retreated from the danger zone. Tony and Johnny called on the peers to describe their experiences with violence. A ten year old described how verbal and physical assaults hurt her heart, leading to an imbalance in her soul, making it difficult to walk across the tightrope of life. Then a slim, big-eyed eleven year old, named Alex, who looked all of seven, stood to speak. Because of malnutrition, he is a stunted child but with the heart of a giant and an articulateness beyond his years. He spoke of how he often witnessed his father beating his mother. This made him afraid that this experience could lead him to beat his children someday because that was the only example of how parents behaved that he had seen growing up. He told of coming home from school one day to find his mother gone. He has not seen her since. His father works selling fruit on the street and is not home to cook dinner for him, his father explaining that he must work late to provide what food they have. The program director explained that, although many people in the school community care for Alex, he is no one’s child. Alex then sang a song called Love in the Seven Seas a cappella. It was haunting.

We finished the workshop with another rap number with everyone getting their cardio workout on the dance floor. As Tony and Johnny posed for pictures with the peer educators, it began to rain. In the adjacent streets deep puddles began to form, and children splashed and danced through them as children would anywhere. Two boys threw a ball back and forth, oblivious to the downpour. I stepped out towards them and motioned for the ball. The bigger boy threw it to me and we proceeded to have a catch over the ten-foot chain-link fence that separated their houses from the schoolyard. Other boys and girls quickly gathered, and I threw to each of them in turn. There we were – two worlds, a high fence and a ball in the rain – children becoming adults before they should, experiencing things no child ever should, and an organization trying against all odds to have children be born wanted and loved, to parents able to raise them, educated and ready for a world where there is often more rain than sun. 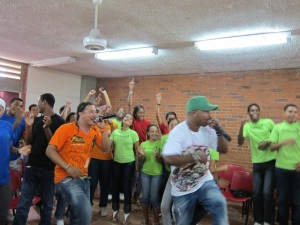